Things I learned after watching Zoey Deutch in Flower: she truly is worth the buzz that she is getting and her mom is Lea Thompson.

I will admit that other than having an interesting sounding name, I wasn't exactly blown away by her other performances up until this point. I mean, sure, she added some interesting supporting elements to Everybody Wants Some and Dirty Grandpa, but I was less than enthused by her lead performance in Before I Fall.

You know, that's the one where a young woman has to relive her death day over and over again. No, not that one, the other one. Yeah, I forgive you if you have trouble remembering the movie. I was left with a sense of "meh" after watching it and I was convinced that Zoey Deutch was all hype and very little substance.

So, when the opportunity to review Flower came along, my expectations were predictably low and I was resigned to the fact that I would most likely hate the film. I can happily attest that I was wrong and it was Deutch's performance that is most responsible for elevating this film above typical teen angst schlock.

The film follows Deutch's Erica and her posses of "vigilantes," aka friends, who have taken it upon themselves to right certain wrongs around them. When Erica's new stepbrother informs her that a high school teacher molested him when he was younger, she and her friends set about to expose this teacher's dark secret.

It seems in recent weeks that we have gotten an interesting spate of films that mix dark comedy with teen angst reminiscent of say Heathers or Jawbreaker. First, I loved Thoroughbreds which also took a young cast of promising young actresses and let them reach into the dark sides of their acting souls and create funny, dark entertainment.

While there is a bit more comedy in Flower than Thoroughbreds, you can tell that they both share similar roots and would make for a very interesting double bill. This might be a reach, but when I watched it, I was struck by how Flower could almost be a prequel to True Romance, think Alabama attending high school in sunny California and living a life that would eventually lead to her working as a call girl in Detroit.

As I mentioned, I was really impressed with Zoey Deutch's work in the film. Naturally, the film rises or falls on the performance from Erica as this is her showcase and Deutch takes on the challenge with wonderful results. She brings a vulnerability to the character that really resonates with the audience. It would be so easy to simply play Erica as any number of cardboard cutouts that have come before, but Deutch is able to genuinely make unique decisions that give dimension to Erica.

It is not surprising to see Ingrid Goes West writer and director Matt Spicer chip in on the writing duties of Flower. Ingrid is another excellent example of a troubled young woman trying to navigate reality on that razor's edge line of sanity. He is quickly building a reputation of creating interesting worlds in which slightly crazy people can play in. Let's face it, we are all a bit crazy at times and there's always something to be said about finding common ground in a film that can also make you laugh.

I also have to point out the top-notch supporting cast. Adam Scott, Kathryn Hahn and Tim Heidecker all bring their A games to the film and their veteran comedic chops certainly to the film, but they weren't the only ones showing off. Relative newcomers Dylan Gelula, Maya Eshet and Joey Morgan comprise one of the more interesting gangs of supporting vigilantes to come by in a long time.

I'm not sure if Zoey's mom Lea Thompson would find many parallels to her own early career, but sometimes it's good to blaze your own trails. While Lea Thompson was shaping my burgeoning sexual desire as the epitome of the "girl next door" in such hits as Space Camp, Howard the Duck and the Back to the Future films, Zoey seems to be embracing the bad girl persona if Flower is any indication.

She made a believer out of me and if you still need some convincing, I suggest you check out Flower and see if you have similar results. Flower is now available on DVD. 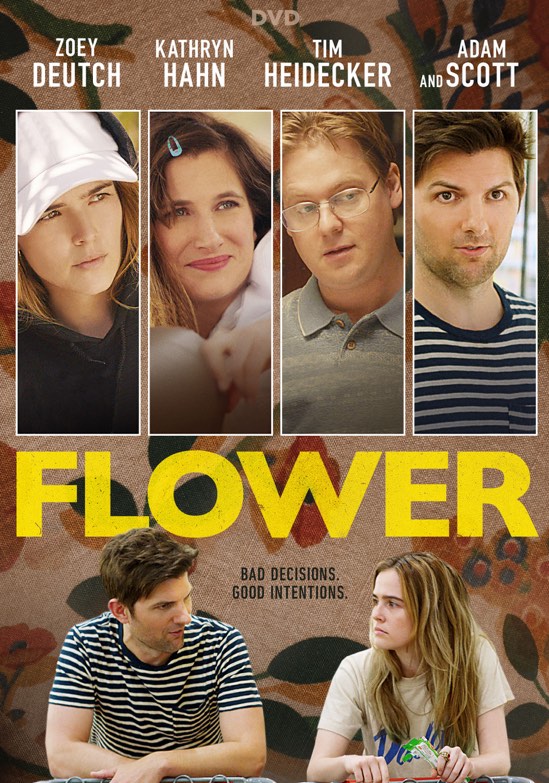